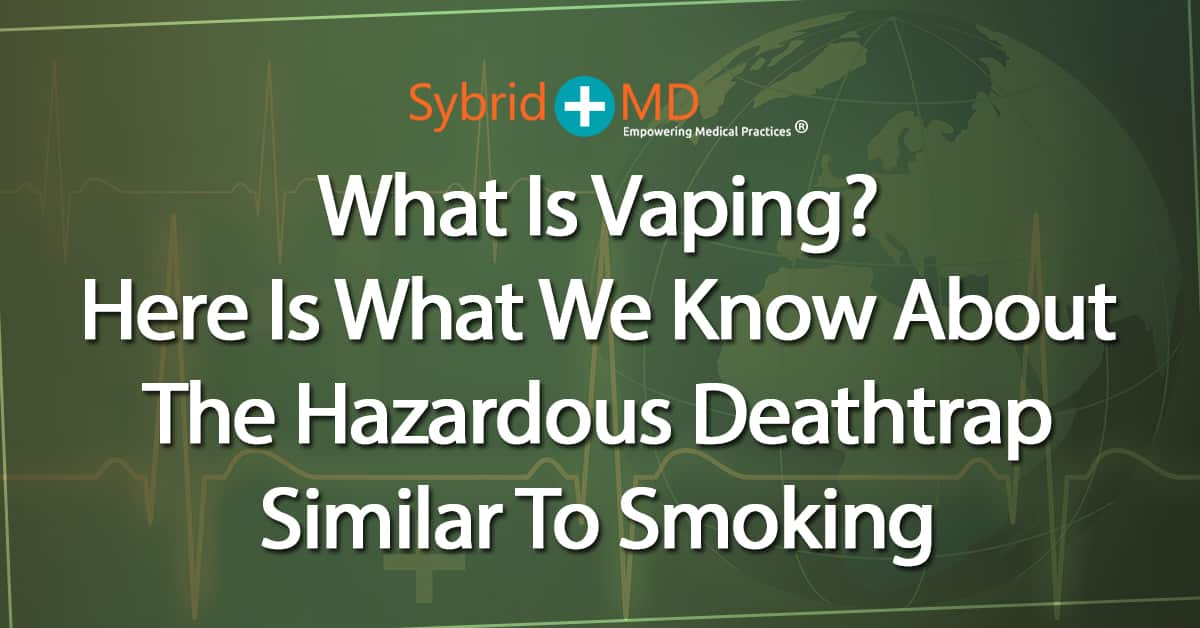 It is becoming a popular trend; smokers are stopping out their traditional cigarettes and picking up the Vapes. Vaping is similar to smoking but instead of smoke, it is the inhalation and exhalation of the aerosol. It’s often referred to as vapor manufactured by an e-cigarette or similar device.

The terminology is used because e-cigarettes do not produce tobacco smoke. It produces aerosol that is often confused with water vapor and actually contains fine particles. Many of these particles contain varying amounts of toxic chemicals that have been linked to cancer, respiratory disease, and heart disease. With the advent of e-cigarettes introduced to the US mass market in, Vaping has gained popularity.

Vaping devices include not only e-cigarettes but also vape pens and advanced personal vaporizers (also known as “MODS”). E-cigarettes, which bear a resemblance to smoked cigarettes, and vape pens, which remind you of large fountain pens, are generally simpler in design and less costly user-friendly devices. Physicians are seeing so many patients switching from old-fashioned cigarettes to E-cigarettes. The good news is smoking is lesser than before and the bad news is Vaping is spreading like jungle fire.

“Vaping” The Latest Trend Despite the early optimism that these products came on the market in the late 2000s, assumed the mounting evidence that their hazards, especially for young people, prevail over the benefits, health professionals recommend caution when using them. Altogether, an evaporation device consists of a mouthpiece, a battery, a cartridge for receiving the E-liquid or the E-juice than a heating component for the device powered by a battery. While the device is being used, the battery heats up the heating component. It converts the contents of the e-liquid into an aerosol.

That is then inhaled into the lungs and exhaled. The components of the liquid vary, but in general include, nicotine-evaporating chemicals, such as propylene glycol and vegetable glycerin, additives and flavorings. With the multitude of flavors, health experts say the new form of smoking is a big attraction for teenagers. It is becoming an epidemic that many believe to be a safe way of smoking.

The latest and most popular steam product is the JUUL, a small, slim device that resembles a computer’s USB flash drive. The subtle design makes it easy to hide, which explains why it is so popular with middle and high school students. Today, it accounts for about 72 percent of the market share of steam products in the United States. There are several tempting flavors such as mango and fruit vegetables. Each JUUL product contains a high dose of nicotine, with one capsule or one flavor cartridge containing approximately the same amount of nicotine as a whole pack of cigarettes E-cigarettes, Vape pens, and JUULS, they are often advertised as safe replacements to smoking.

Moderately they are widespread because of their cool designs, fun factors, above 8000 flavors and the fact that they are easy to hide. Which means not only smokers want them but also kids. Adolescents are particularly defenseless to the adverse effects of nicotine because their brain is developing rapidly. For kids vaping is far more dangerous. When kids use e-cigarettes or JUULS they get a big dose of nicotine. This disrupts their brain development. It changes the connection between brain cells causing health issues like affecting the learning process, moods and impulse control. It also makes the depression and anxiety worse.

The Potential Hazard Vaping Can Cause: As any smoker can tell that nicotine is highly addictive that makes it very difficult to quit e-cigarettes and vaping. Vaping causes way more troubles. It always starts with something simple e.g. simple juices or flavored tobacco juices.  In the course of the next few years, people get bored and upgrade to bigger mods. The nicotine that hit the lungs is equal to the amount of nicotine of five cigarettes. On top of that, the Vaping liquids are so full of sugar that makes the person addicted to vape like some drug. Eventually, that leads to palpitations, panic attacks, and constant heartburn.

Vaping Urges The Youth To Consume Combustible Tobacco: Although Vaping has helped some smokers to quit, researchers have shown that only 10% of the nearly 1,300 former smokers who opted for smoke extraction were successful. But then again Vaping makes it more likely that the kids and teenagers who use e-cigarettes are more likely to convert to combustible tobacco. They will be even more likely to use combustible tobacco heavily if they have been e-cigarettes users. Teenage e-cigarette users are at a higher risk of smoking cigarettes compared to non-consumers. More than 30 percent of adolescent e-cigarette users smoke traditional tobacco cigarettes within six months.

The Harmful Chemical Properties of Vaping And E-Cigarettes: There are chemicals that could be containing a high concentration of nicotine. These chemicals are found in certain foods. Health experts state that it doesn’t mean they are safe to inhale. When those liquid components are heated at high temperature, they undergo several chemical reactions. There is evidence that e-cigs give off toxic material like formaldehyde (a known carcinogen) which is found in glue. Nitrosamine (linked to cancer) and lead (a neurotoxin). Diacetyl which causes lungs disease and Benzene that beings on leukemia. Although the toxic levels of e-cigs are “9-450 times lower than that of cigarette smoke,” as suggested by this study, formaldehyde and metal levels were comparable to or higher than those of conventional cigarettes.

The devices can also be unsafe. The e-cigarettes explosions have been reported e.g. during use while charging and transporting storage etc. Even though e-cigarettes have been established in part to help grown-up smokers reduce their tobacco consumption and to provide a “healthier” alternative. No study has up till now been conducted on the long-term effects of using e-cigarettes. Due to the recent dramatic upsurge in the use of e-cigarettes, initial results point out that the e-cigarette’s associated cardiac and pulmonary function is negatively affected. However, there is still no absolute answer as to whether these risks outweigh the benefits of changing traditional tobacco cigarettes.

Cessation of E-cigarettes: It is recommended to keep the precautionary attitude because of the long history of the tobacco crisis. For e-cigarettes in order to assess their benefits and long-term effects and sidestep another nicotine crisis. The medical community is apprehensive that amplified accessibility to e-cigarettes could increase global nicotine dependency. Especially among young people, as they are tempted by the different tastes that e-cigarettes offer.

Since steaming does not produce smoke from burning tobacco, e-cigarette adversaries fear that traditional smokers will replace smoking in environments where smoking is not allowed without giving up traditional cigarettes. There is a concern that large-scale advertising and use of e-cigarettes, backed by the increased promotion of these products, could pose significant health risks. Public health officials expressed concerns about the use of other tobacco products, in particular, combustible products.

The End Results Of Vaping Are Still “Unknown” Granting e-cigarettes are safer than traditional cigarettes, health experts do not yet know the long-term effects of vapors on the body. Smokers suffering from asthma should quit smoking, but it is not clear that substituting e-cigarettes for cigarettes is a generally safer alternative. There is no indication that e-cigarettes are a healthier alternative to smoking. There are currently no accepted measures to confirm their purity or safety and the long-term health consequences of using e-Cigarettes are unknown. Although Vaping is considered a safe way but requires more suction than smoking, sucking with more force can be harmful to human health. The only thing that should go into the lung is “air”. However, the risks of long-term use of nicotine and other toxins E-cigarettes are unique till now.