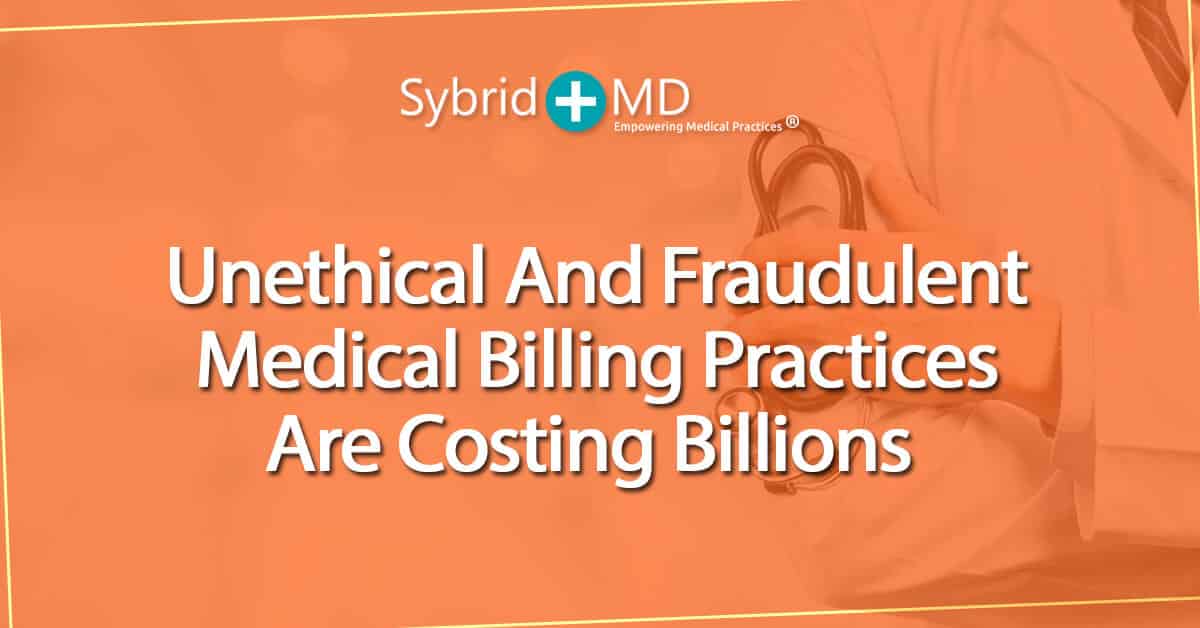 Last year over 600 individuals were charged for healthcare fraud schemes in the United States involving over $900 million in false and unethical medical billing practices. There is no end to it, every year a huge number of medical practitioners are accused of healthcare frauds worth billions. Basically, frauds in the health care industry are no different than frauds in any other industry. Impostors try every means and method to trick the system in their favor. They are as smart as any other outlaw trying to take advantage of the loopholes in the system. Paying attention to every detail, the scammers in healthcare are everywhere. Healthcare consumes a significant portion of the governmental budget every year.

However, the percentage of unethical medical billing practices, fraud waste, and abuse within that spending has increased over the years. The healthcare anti-fraud organizations estimated that 3% of the more than 3 trillion used on healthcare has been lost to fraudulent activities. Although, the majority of medical professionals are dedicated to serving with the best of their integrity, however, a few work equally hard to increase their profits by influencing the system. According to some estimates, the U.S. Government loses almost 1/3 of its healthcare payments to medical scams. It is astonishing that what compels the highly skilled medical professionals to stoop to such a lower level and commit fraud which is getting more traceable every day.

The healthcare system is services-based, and the providers of these services claim the reimbursements on successful execution. However, with up-coding and exaggerated payment claims, healthcare providers are fraudulently earning huge profits. In general medical billing, fraud refers to deliberately and knowingly manipulating medical billing claims in an attempt to deceive the payers. Some of the major unethical medical billing practices are as below.

Upcoding is a type of illegal billing practice by which unnecessary CPT codes are added to the payment claims and claims are submitted for the services that were never performed. For instance, a patient enters the medical facility to get treatment for a sprained ankle or some minor injury. After performing the necessary medical procedures, the health care provider submits exaggerated bills to payers with procedure codes added that were never performed or including unnecessary procedures that were never required to treat the injury. Sometimes a patient goes for a therapy session and the medical claim was up-coded to a full-fledged medical treatment.

This illegal billing practice is tagged as “upcoding “. The healthcare provider must submit the right CPT codes against each procedure performed. That code should clearly indicate what procedure was exactly performed and on which side of the body. These up-coded medical bills sometimes slip through the insurance carrier checks but mostly it can cause objection to payment. By using codes for serious procedures with higher payment rates, providers can significantly increase their compensations too. It means that there are numerous ways by which healthcare providers can fraudulently incur reimbursements, causing huge damage to the healthcare industry and payers. However, this situation can be avoided if you have obtained the medical billing services from a reputed firm like SybridMD which complies with all the national and international regulations and standards.

When under coding occurs the coding in the medical billing does not cover the whole procedures and the entire medical services performed. Another way, the billing organizations make false billing statements and misrepresent the services from what actually occurred. The term under coding refers to the definition of ‘abuse’ and CMS defines them as ‘misusing codes on a claim’.

However, this is something that doesn’t seem to be a hassle for the creator but can backfire for the organizations at the time of audit. Companies neglect or lack that defrauding the auditing process is a federal crime. Therefore, they might feel like they have done no wrong, but there would still be severe consequences.

These examples of unethical billing practices don’t need much explanation to understand. Identical charges can also be taken as duplicate charges or double billing. This is the time when the previous paid bill occurs again or multiple times, even though the patient received the services once.

According to statistics of September 2019, around 411,000 senior citizens faced Medicare premium double billings. The high number was due to the system glitch in the Medicare system. Also, organizations made double-billing most of the time intentionally which leads to federal violations and serious legal liabilities. Many times these federal violations lead to fines of thousands of dollars.

In addition, if the court finds that the practice was involved in the duplication, the physician could also face some penalties. They may include the loss of current and future patients. Plus, it will directly affect the relationship between the insurance company and the provider.

Billing the never given treatments

Claiming reimbursements for the treatments and procedures that were never performed. Medicaid and Medicare can only reimburse for the procedures that are authorized. In this case, the provider can never bill for tests, treatments, or procedures which are not authorized. Both Medicare and Medicaid issue a list of authorized tests and procedures of which a patient can avail. However, by manipulating the diagnosis, healthcare providers can add procedures that were not required. Some healthcare providers offer medical treatments that were not necessary and were provided only to increase reimbursements. These are the most common type of unethical medical billing practices and is a serious violation of the healthcare act. Practices generally can’t keep a tab on their medical billing staff, which also leads to such legal complications. Outsourcing medical billing services can greatly reduce such frauds or you can implement strict control measures – but that would incur additional costs.

The Office of Inspector General (OIG) has defined unbundling as a type of medical billing fraud when a “billing entity uses separate billing codes for services that have an aggregate billing code.” Unbundling is similar to up-coding. When you go to a medical practice some services are billed together at a reduced cost. For example, if you are being treated for fever, cold and cough the bill will be all-inclusive. Unbundling is a process where a practice submits three separate bills for each procedure using three separate codes for fever, cold, and cough instead of one.

This is an illegal billing practice and it increases the bill. The government-provided health coverage and private insurance carriers have to pay more reimbursements when the medical procedures are performed and reported separately. When the same medical procedures can be bundled together at a lower rate, it comes under illegal billing practices. Today, most of the healthcare providers in the United States use medical billing software or an EHR system that integrates with medical billing and credentialing services software. This medical billing software is capable of prompting the provider to identify duplicate services or procedures.

This is an intentional act on the part of the healthcare provider and is considered the most common type of medical fraud. “Durable medical equipment” DME refers to the medical devices that are essential for a patient’s treatment. It includes all types of equipment e.g. private bedroom, motorized, etc. The wheelchair scam has been widely reported but has no end to it. It has cost the government’s main health care assistance program tens of millions of dollars.

Fifty separate investigations underway in nearly two-dozen states have identified $167 million in fraudulent power wheelchair claims. “It certainly is the fastest-growing scam in Medicare,” said Dara Corrigan, acting inspector general in the Department of Health and Human Services. “It’s about a wheelchair that is very expensive and about people trying to make a profit.” The provider will bill for devices and medical equipment that the patient has never received. Mobility scooters are especially popular in such scams. This is one way the healthcare providers divert the funds away from treatment to their own wallets and is one of the major types of illegal billing practices.

In most types of unethical medical billing practices, the consumer seems to be partially aware. However, there is another type of fraud that is on the rise is called medical identity theft. Computer-based health records have many pluses, except on that computer data is prone to hacking. Sometimes, the handlers of the patient health records forget unencrypted devices like USB or their laptop is stolen. In such a scenario, the identities of thousands of patients are exposed and stealers take advantage of it.

If hackers and stealers get access to patient health records, they can get personal information along with, insurance numbers. Identity theft and hacking of medical information with personal details are costing millions in illegal billing practices. Medical billing fraud is costing billions to government organizations and insurance companies. There are efforts being done by government agencies and private stakeholders to curb the rising instances of fraud. Health Insurance Portability and Accountability Act (HIPAA) specifically establishes health care fraud as a federal criminal offense. However, there is still more that needs to be done to safeguard the system.

Patients can avoid such frauds by adapting a few ways. By looking closely at the receipts and financial documents you received from the physician’s office. Check out the entries for the same services before ratifying them and sending them to your insurer.